The Atlantic Gaming Desk is just one of Atlantic’s numerous offerings in the gaming desk market, but it stands out from the rest. 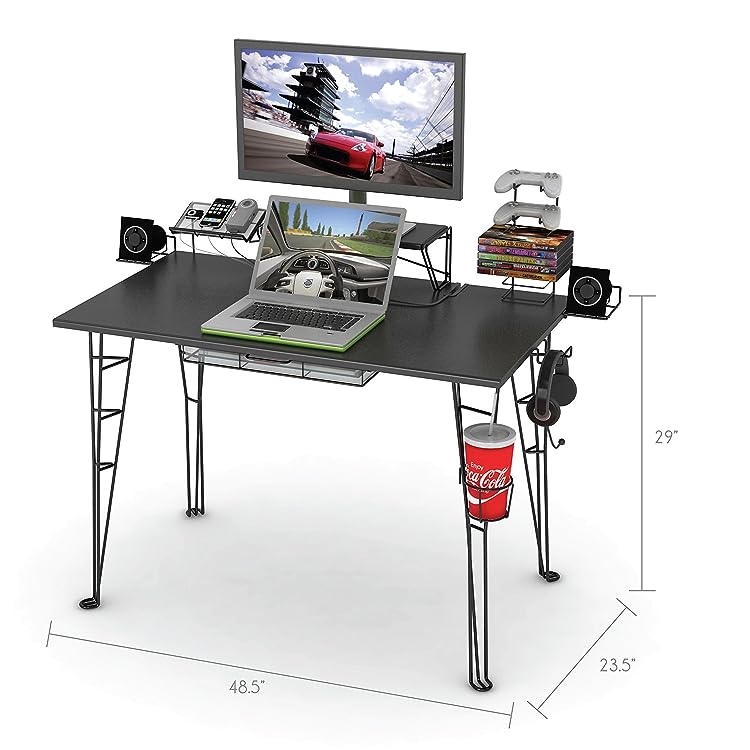 Compared to other popular brands, Atlantic actually fares rather well, even though they’re not strictly a gaming-centric company. Some of their products have been rising in popularity over the years within the gaming community, thanks to the company’s reputation in manufacturing durable and sturdy products.

Read on for a quick but comprehensive Atlantic Gaming Desk review!

The Atlantic Gaming Desk is touted to be made specifically for gamers, with all its features and attributes. More than an ordinary desk, this gaming desk is extremely feature-rich, with additions such as a tablet/phone charging stand, speaker stands, controller stand, storage for games, and cable management provisions, among others.

Not to mention, at less than $200, it’s cheaper than plenty of other gaming desks in this range, making it a strong choice, especially for budget-conscious gamers want something with a good value for money.

It’s time to delve into the details of the Atlantic Gaming Desk. Is it truly worth the hype?

In the next few sections, we’ll talk about its specifications, aesthetics, features, and even its manufacturer, Atlantic. The affordable price tag makes it a very attractive option, but does the quality hold up? Without further ado, let’s begin.

Design-wise, there’s nothing to complain about here. The Atlantic Gaming Desk feels and looks like a strong and sturdy high-quality item, made of solid steel. And when we say steel, we really mean steel.

From the tabletop to the body and even to the legs, this gaming desk is as solid as can be. Even the extra features such as the stands are all metal. If you prefer your gaming desk to be all-metal, you’re going to love the Atlantic Gaming Desk. 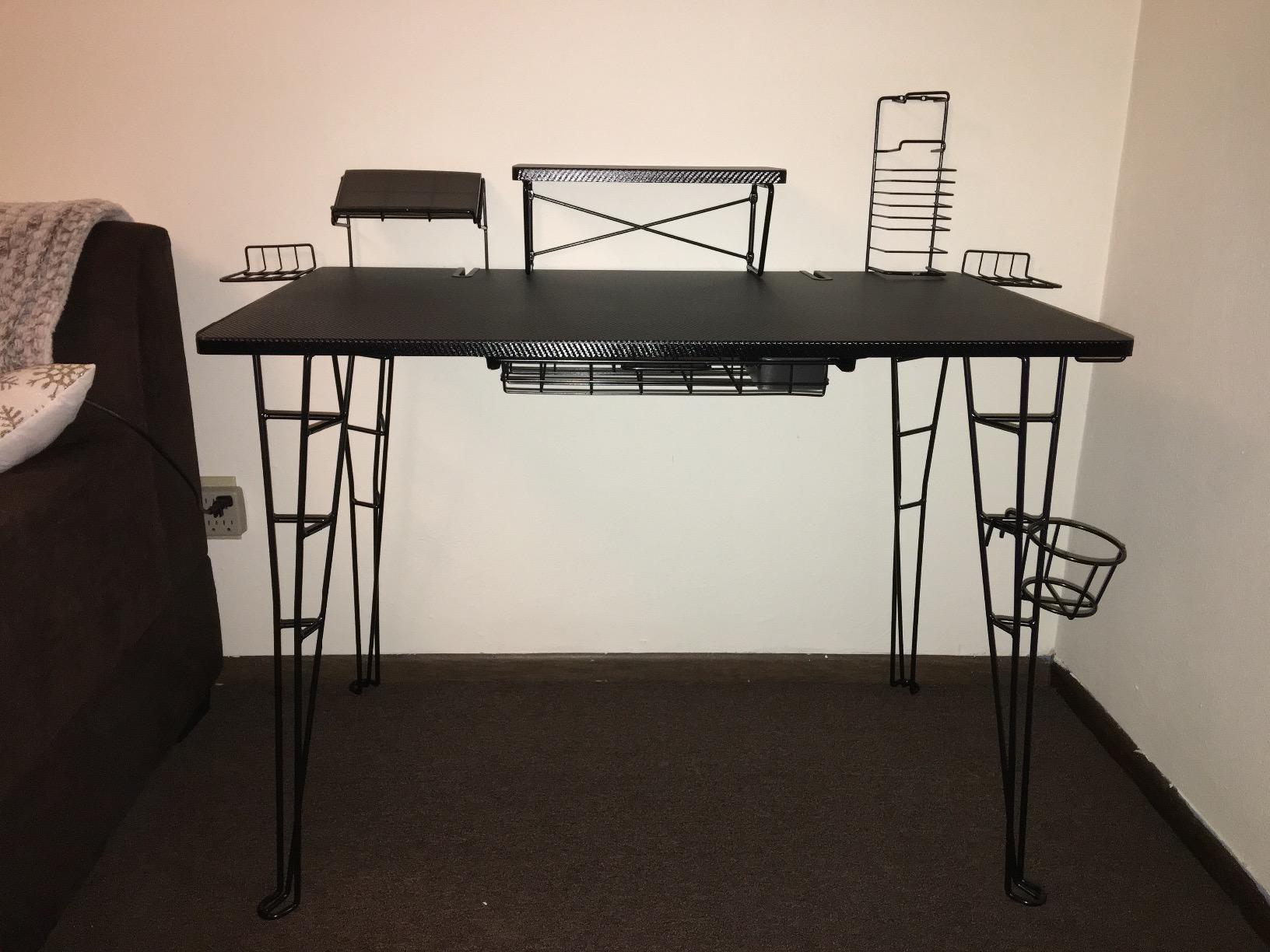 The tabletop itself has a charcoal-colored carbon fiber laminated top, which feels nice to the touch.

If you’re looking for a gaming desk with plenty of features, you’ll definitely love Atlantic’s gaming desk. It’s jam-packed with all the computer essentials you can ever ask for–and some more.

Its list of features include a charging stand for your phone or tablet, two speaker stands on either side of the desk, a controller stand, a storage for games, an under-desk drawer made out of wires, a power strip holder at the rear end of the desk, a headphones hook, and even a cup holder. 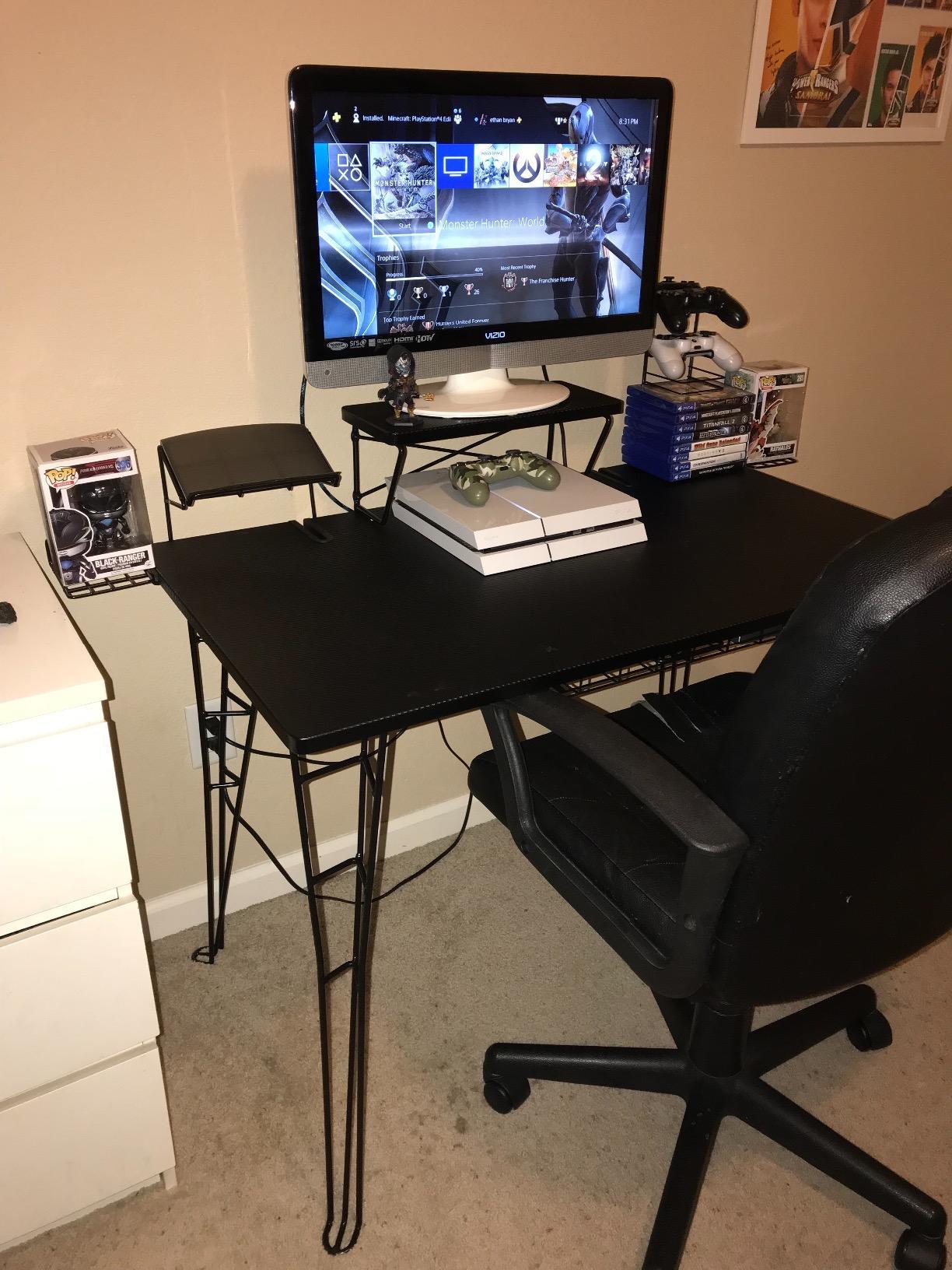 It even has built-in cable management to ensure that you don’t have to deal with tangled wires no matter what your setup may be!

With this gaming desk, you can easily hold all your necessities and even those things that you never would’ve thought of as a necessity. Have you always wanted a spot to perch your headphones on when you’re not using them? Atlantic’s got your back.

Have you always been annoyed that most gaming desks nowadays don’t have an under-desk drawer? Atlantic has that covered too. Have you ever wanted to drink something while gaming, only to give up because you didn’t want to place your cup on your table? 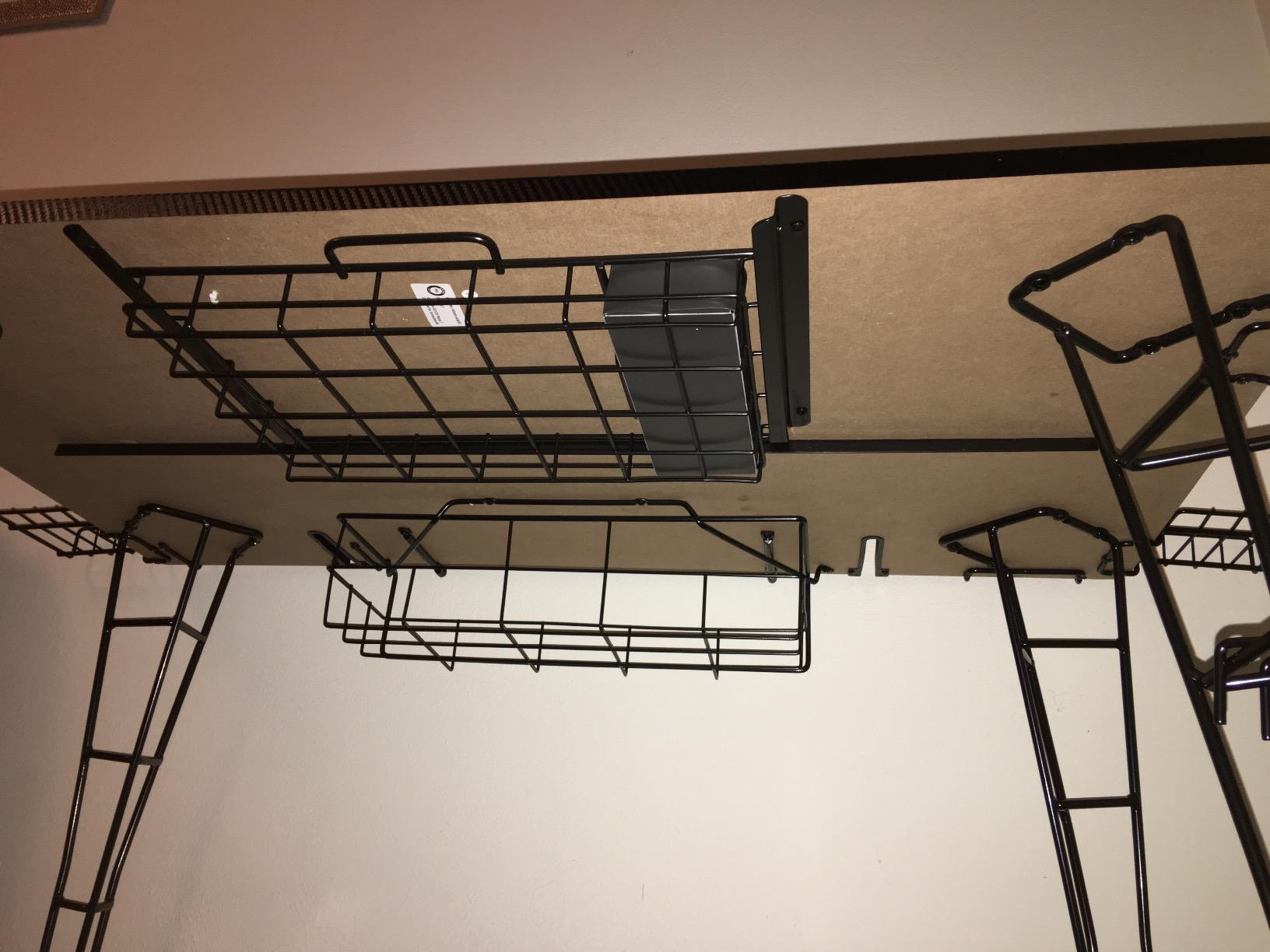 After all, computer and liquids don’t really mix well. Guess what, Atlantic has thought that through with their built-in cup holder. Now, there’s no need to be scared of spills anymore.

The Atlantic Gaming Desk offers an above average desk space of 40”, perfect for a 27” inch screen or a 32” TV display. It can also support up to 40 pounds of weight.

Sure, it’s not much when compared to goliaths such as the Arozzi Arena Gaming Desk, but it’s sufficient for most players. You still have enough space for a large mousepad and some other extra items. 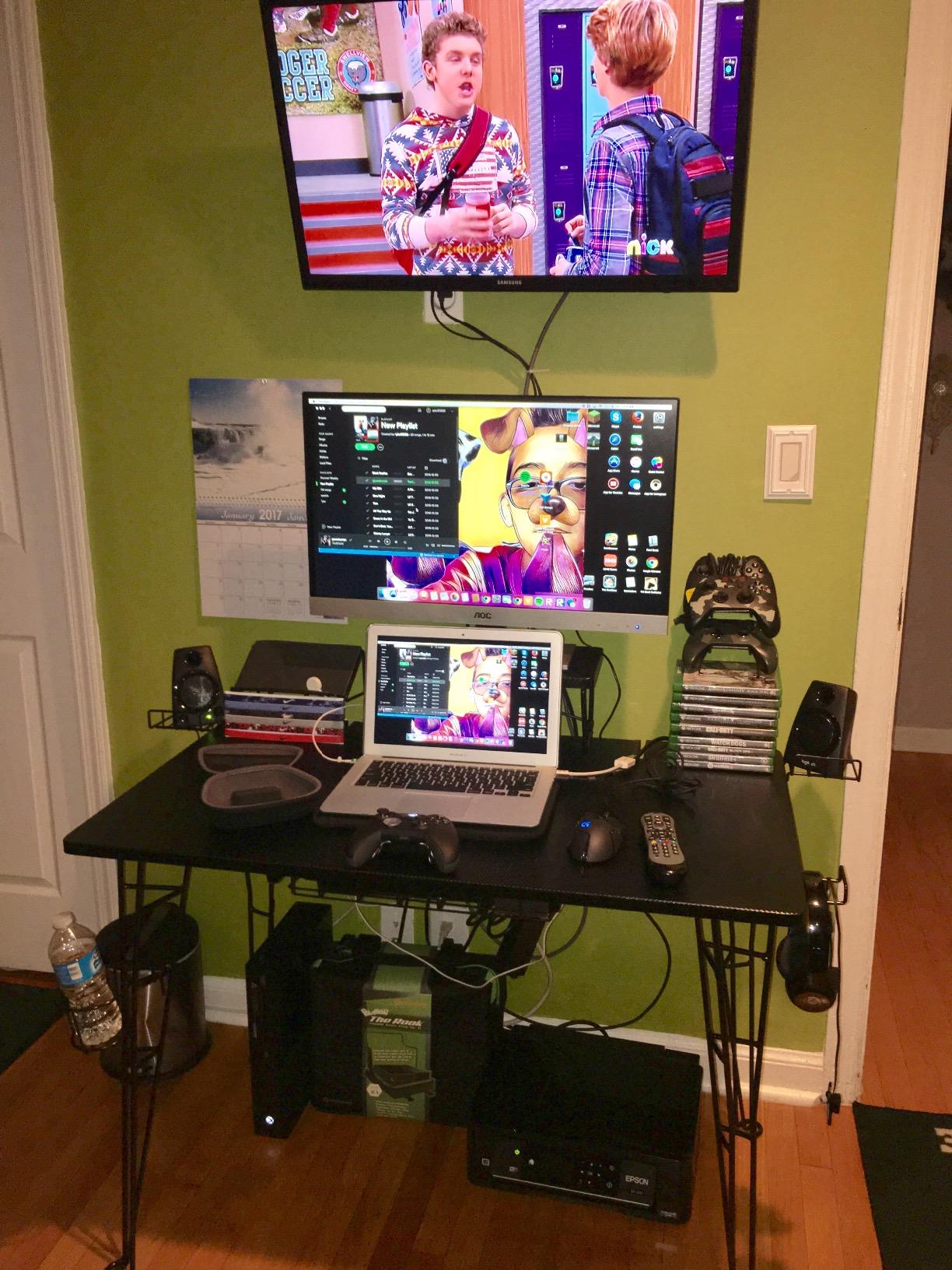 This is useful for those who need to have a monitor and a laptop at the same time, and also for those who don’t like having something obstructing their screen. You can then use the space for other things, such as additional accessories.

When it comes to cable management, Atlantic didn’t cut any corners. They also included some provisions for the wires in order to avoid tangled cables.

It’s super easy to set this gaming desk up, which is partly because of its smaller size. The process itself is very manageable and you can choose which additions you want to include to the gaming desk.

No need for special tools, unlike some other gaming desks. You don’t even need to have a friend over while you’re setting this up–just a half hour alone and a bottle of water is enough.

Pros of the Atlantic Gaming Desk

The Atlantic Gaming Desk has a lot of pros to offer for less than $200. Like we’ve been saying in this entire review, it’s a solid contender in this range of gaming desks and it’s worth a shot if you have less than $200 to spend for a gaming desk. 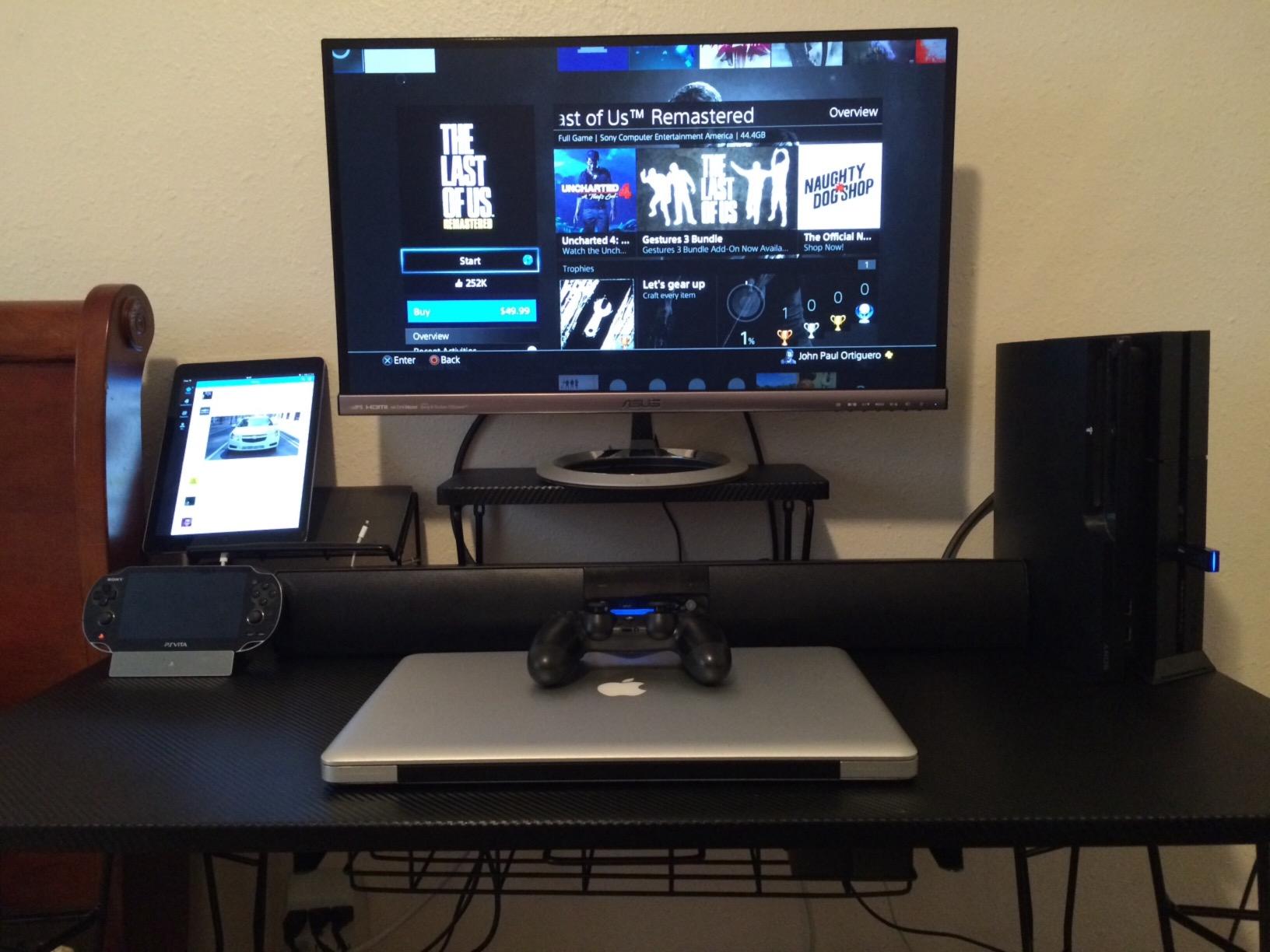 Extremely feature-rich. No need to think about extras when purchasing this gaming desk, Atlantic has already done the thinking for you!

All-metal, solid body. You can be sure that this gaming desk is as sturdy as ‘sturdy’ can be. Its all-metal build does not only make this table nice-looking, it also makes it a lot more durable and solid. It can carry up to a weight of 40 lbs for the desktop and up to 100 lbs for the entire desk.

Affordable price. Believe it or not, this gaming desk can be had for as low as $150! If that’s not a good deal, we don’t know what is.

Elevated stand and cup holder. Not a lot of gaming desks have an elevated stand and surprisingly, it’s something that we never thought we’d appreciate before. As for the cup holder, well, it’s a nice little addition, don’t you think?

Cons of the Atlantic Gaming Desk

That said, the Atlantic Gaming Desk isn’t perfect. It does have a few minor drawbacks here and there that might be a dealbreaker for some, so be sure to keep those in mind.

No real dual-monitor support. The Atlantic Gaming Desk can accommodate one full-fledged monitor on its elevated stand as well as one smaller screen on the actual desktop, but that’s about it. 40” isn’t enough for a dual-monitor setup, after all.

The features may be too crammed together. Atlantic tried its best to cram as many features as possible in this desk, which is both a good thing and a bad thing. And obviously, the bad thing about it is that some of the features are a bit smaller than average. One example is the pair of speaker stands situated on either side of the desk.

Atlantic Inc. has been around for about 30 years, focusing on mainly tech-related products and using innovative and quirky designs for their different offerings.

According to their website, they “are inspired by the latest cultural trends integrating eco-friendly approaches.” True to these words, the California-based company isn’t afraid to experiment with their creations.

They’ve used all kinds of materials for their products, such as metal, wood, plastic, and even carbon-fiber, like the Atlantic Gaming Desk.

Just like what we’ve been saying in this review, the Atlantic Gaming Desk is an attractive choice for budget and non-budget gamers alike. While it does have a few downsides, its pros still outweigh the cons in the long run.

We especially love the elevated stand and the unusual additions that make this gaming desk shine among dozens of other competitors.

Knowing this, is the Atlantic Gaming Desk worth the less than $200 you’re going to spend? You bet it is.

This site uses Akismet to reduce spam. Learn how your comment data is processed.

Gogamingshop.com is a participant in the Amazon Services LLC Associates Program, an affiliate advertising program designed to provide a means for sites to earn advertising fees by advertising and linking to Amazon.com. Additionally, Gogamingshop.com participates in various other affiliate programs, and we sometimes get a commission through purchases made through our links